Systemic-onset juvenile idiopathic arthritis is one type of juvenile arthritis. SoJIA/SJIA has some differences from other subtypes due to it being autoinflammatory and systemic in nature. Below is a list of studies and other information on diagnosing and treating SoJIA.

Systemic JIA Foundation – Lots of great information on SJIA and resources for SJIA families at this website.

SJIA Parents’ Questions Answered by Doctors at Family Day – Parents ask questions at the SJIA Family Day in Cincinnati in 2017. Read the answers from the expert doctors here.

Systemic Arthritis in Children: A Review of Clinical Presentation and Treatment – An comprehensive overview of SoJIA. This paper covers age of onset, symptoms, complications, prognosis, and treatments.

“The lack of shared genetic risk factors between sJIA and other JIA subtypes supports the hypothesis that sJIA is a unique disease process and argues for a different classification framework. Research to improve sJIA therapy should target its unique genetics and specific pathophysiological pathways.

At a time when an emphasis is being placed on the personalization of medicine, it is important that we move away from broad classifications based on non-specific clinical observations and move towards the use of molecular and genetic data in establishing diagnoses, as well as pathophysiology. In turn, clinical practice will advance as these data are translated into targeted therapeutic approaches.

Perhaps it is time to separate this condition from JIA all together to make clear that it is fundamentally different from any other form of JIA and needs to be considered and treated differently. Given that the currently available treatments for this condition are still imperfect, it remains imperative to continue to employ contemporary investigative approaches in sJIA, to elucidate its pathophysiology and to identify the next generation of therapeutic strategies.”

Development of positive antinuclear antibodies and rheumatoid factor in systemic juvenile idiopathic arthritis points toward an autoimmune phenotype later in the disease course.

Distinction of a Psoriatic Subset Within a SoJIA Clinic Population – From this study: “We describe a subset of soJIA patients who developed psoriasis. By clinical course, the psoriatic group was distinct from the other soJIA patients in the development of enthesitis and non-cervical spine axial involvement.” And, “Based on cytokine profiles and disease course, SoJIA is perhaps best classified as an autoinflammatory disorder.”

New Criteria Released for Macrophage Activation Syndrome in Juvenile Idiopathic Arthritis – “Another caveat to note is that many systemic JIA patients are now treated with either the IL-1 inhibitor canakinumab or the IL-6 inhibitor tocilizumab. These drugs inhibit two of the pro-inflammatory cytokines that the immune system oversecretes during MAS. So patients treated with one of these two drugs may not present with either high fever or the typical laboratory features of MAS, such as a peak ferritin level of 684 ng/mL. Or their presenting features may be milder, not meeting the criteria.”

MEFV Mutations in Egyptian Children with Systemic-Onset Juvenile Idiopathic Arthritis – Study showing patients with SoJIA were found to have familial Mediterranean (FMF) fever gene mutations. “SoJIA patients had a significantly higher frequency of MEFV mutations (66.7 %) than in the healthy control population (16.7 %). V726A was the leading mutation in SoJIA patients, with an allelic frequency of 15.74 %, followed by E148Q, with an allelic frequency of 7.4 %. Children who were carriers of MEFV mutations had an 18 times higher risk of developing SoJIA than wild-type carriers [odds ratio 18.0 (95 % CI 5–69), P < 0.01]. E148Q was the leading mutation, present in 13.3 % of healthy controls.”

Determining an “autoimmune” phenotype in systemic JIA – Although research points to SoJIA being an autoinflammatory disease, this study finds a subgroup of SoJIA patients who have a more active and destructive arthritic disease course and also produce autoantibodies. These cases are referred to as a CAPA-subtype of SoJIA.

NIH Questions and Answers about Juvenile Arthritis – This is a good explanation of the different types of childhood arthritis types. It covers the basic symptoms to distinguish SoJIA from the autoimmune arthritis diseases.

Treatment advances in systemic juvenile idiopathic arthritis – This study, published in 2013, gives the current recommendations for biological treatments. “In direct response to these recent advances in therapy, the American College of Rheumatology updated their treatment recommendations for systemic JIA in 2013 [14]. Biologic agents that inhibit IL-1 (anakinra or canakinumab) or IL-6 (tocilizumab) are recommended as the first glucocorticoid-sparing therapies for children with active systemic features.” It is noted that treatment for SoJIA is different than for autoimmune forms of juvenile arthritis.

Anakinra as first-line disease-modifying therapy in systemic juvenile idiopathic arthritis: report of forty-six patients from an international multicenter series. – This is a comprehensive study of 46 SoJIA patients. In addition to treatment, symptoms and details on patient outcomes are noted. “Taken together, our results lend support to the use of IL-1 blockade early in the course of systemic JIA. Treatment was associated with brisk improvement in systemic inflammatory features and an unexpectedly low incidence of chronic, treatment-refractory arthritis. Further, anakinra obviated the need for corticosteroids in many patients and was associated with the ability to taper steroids rapidly in others, potentially reducing the morbidity commonly associated with treatment for systemic JIA. We therefore suggest that anakinra is a promising option for first-line DMARD therapy in systemic JIA and that it should be studied in greater detail to establish definitively the efficacy and long-term safety of this approach.”

Efficacy and safety of tocilizumab in patients with systemic-onset juvenile idiopathic arthritis: a randomised, double-blind, placebo-controlled, withdrawal phase III trial. – Actemra proved to be an effective treatment for children with SoJIA.

Early Treatment Of Systemic Onset JIA With Anakinra Restores The IL-18 Response – “First line treatment with anakinra (an interleukin-1 (IL-1) receptor antagonist), results in a ‘good’ clinical response (ACRp90) in patients newly diagnosed with systemic onset juvenile idiopathic arthritis (SoJIA), and restores the deficient IL-18 response of natural killer (NK) cells*, according to a new study presented June 12 at PReS 2009, a joint congress with the 2009 Congress of the European League Against Rheumatism (EULAR) in Copenhagen, Denmark.”

Tumor Necrosis Factor Receptor-associated Periodic Syndrome Mimicking Systemic Juvenile Idiopathic Arthritis – A study showing TRAPS and SoJIA have similar symptoms. Genetic testing helps differentiate the two. “We report two cases of tumor necrosis factor receptor-associated periodic syndrome (TRAPS) in patients in whom systemic juvenile idiopathic arthritis (JIA) had initially been diagnosed or suspected. One patient, given a diagnosis of systemic JIA, was a 10-year-old boy who had presented with recurrent episodes of spike-fever, skin rash, arthritis, and myalgia. The other patient was his 7-year-old sister, who presented with similar symptoms and was suspected of having systemic JIA.“ 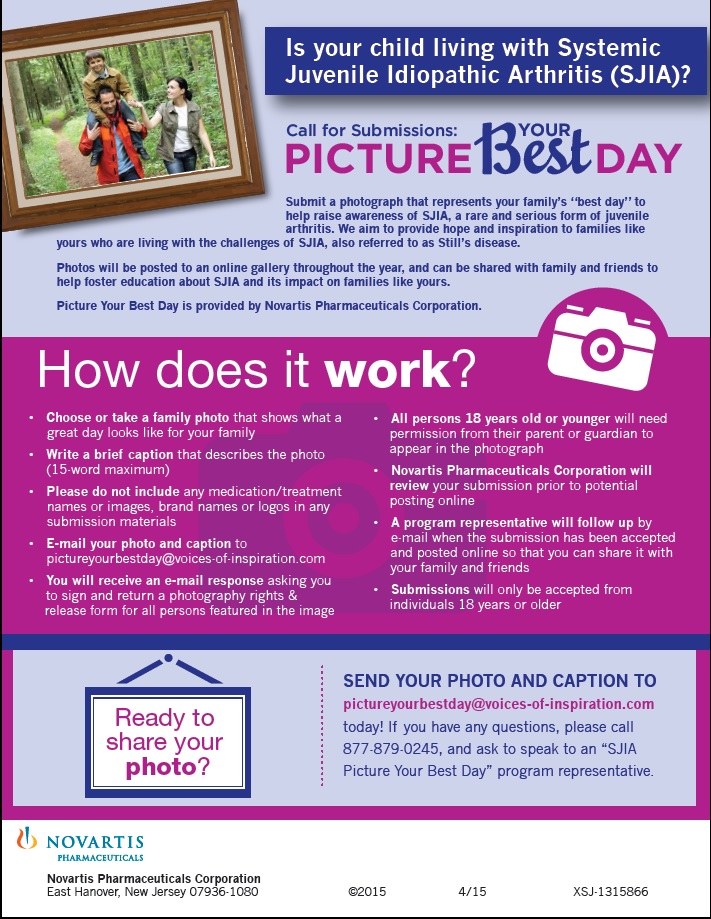 NIH Research Funding Benefits Everyone by Improving Health for All!